Kimolos or Arjentiera, as the Franks “baptized” it in the 13th century, from its silver rocks, a breath from the island of Aphrodite, Milos, reminds you of a white paint touch on the Aegean map. 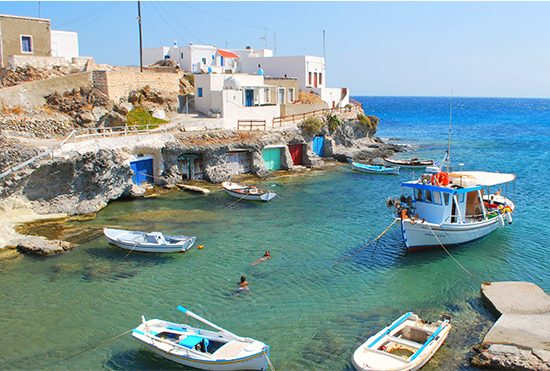 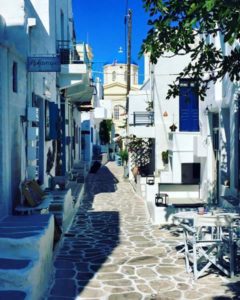 Kimolos: “Silver in the Aegean”

The picturesque medieval castle, the creeks with white rocks and the relaxed rhythms make up the ultimate holiday setting.

Kimolos or Arjentiera, as the Franks “baptized” it in the 13th century, from its silver rocks, a breath from the island of Aphrodite, Milos, reminds you of a white paint touch on the Aegean map.

A Volcanic island with rich geological “treasures” enchants with its barren, rocky Cycladic landscape and its modest, unknown beauty.

Psathi’s  port, a picturesque, pebbly bay, welcomes the visitor to his bosom, while the unique village offers atmospheric walks in its labyrinthine, whitewashed narrow streets, where walking through bougainvilleas and traditional chapels reveal the medieval castle.

You can explore the view from the windmills from “Xaplovouni” and follow the path to Mount Sklavos, which leads to “Skiadi”, a stone natural sculpture, sculpted by Cycladic winds                    “ meltemia”.

The bays “ Rema” and “Goupa”,  adjacent to the village “ Horio”, host the caves  named “sirmata” which are dug into the soft rocks, with colored shutters, where the fishing boats are            “hospitable for their winter hibernation “.

“Horio” Or The Village, the main settlement of the island, unfolds through narrow, cobbled streets with flowered courtyards, beautiful squares and authentic windmills.

In the middle dominates the medieval castle, a “squeaky” ring of centuries-old, two-storey preserved houses, built of local iron-plates, with brilliant coats of arms and historic dates to decorate their vestibule. There is also the Byzantine temple of the Birth of Christ.

The ancient city of Kimolos lies immersed into its sea depth at the “Ellinika”. On the seashore, discover carved tombs from the Mycenaean to the Hellenistic period.

The sandy beaches with the cool, emerald waters are the ace up the sleeve of the island. Choose to swim in Aliki, Bonatsa, Kalamitsi or the more remote, Monasteries (officially Monastiria). Prasa  with  its white, clear sand remind you of an exotic destination and at its shores,  the Mediterranean seal monk “Monachus Monachus” finds its shelter. This is also where even up till today the extraction of chalk is done .

A mere nautical mile is the uninhabited island of Polyagiou, which hides some of the most beautiful bays you will encounter in the Aegean, with crystal clear blue waters.

For a bath on the picturesque beaches of the island and a one-day excursion to the beautiful and picturesque Milos.

Dine in the hospitable taverns by the sea.

It is worth seeing the 14th century castle, the Archaeological Museum,

The Museum of Folk Art in the island’s village, and the hundreds of Byzantine churches all over the island.

Do not miss to visit the famous ‘shade,’ the stone mushroom in the center of the island. (officially called “skiadi”)

You can wander in the evenings on the narrow cobbled streets and small picturesque bars. 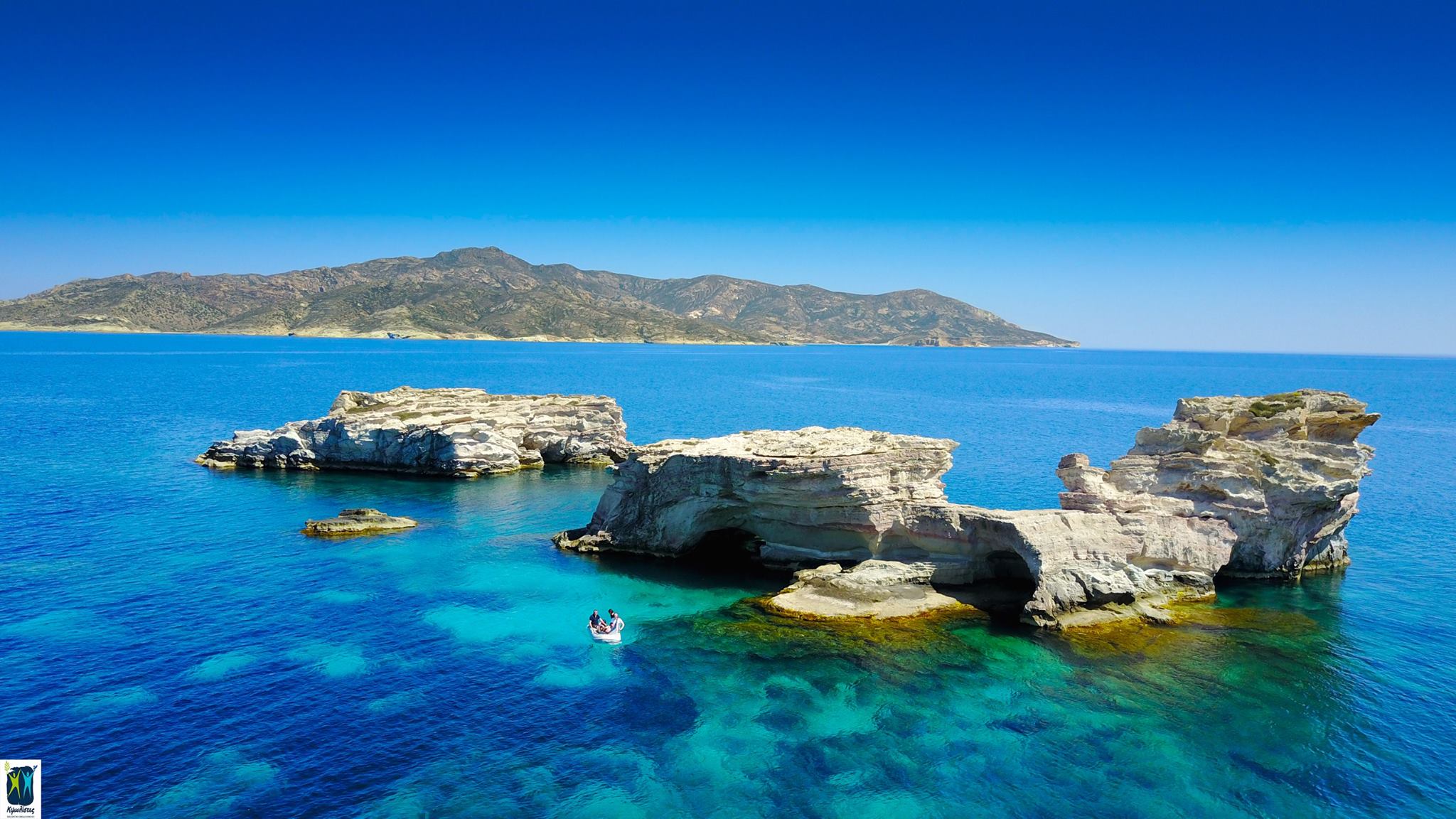 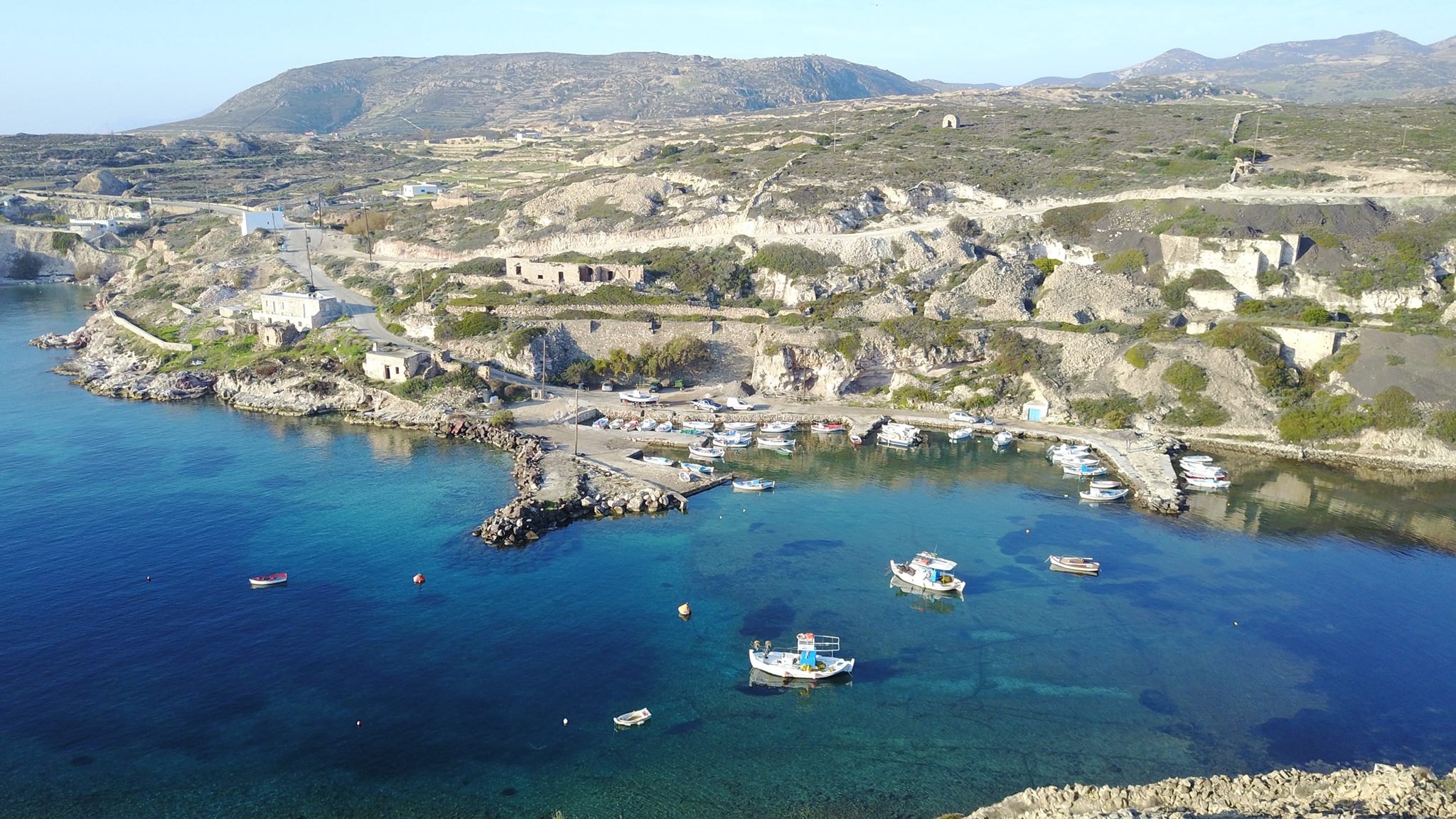